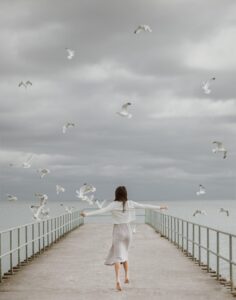 When the Dew on the Grass team first decided upon exploring the word Freedom, my mind was straight-away drawn to the antithesis of freedom, which is to be confined in some way, either by our own feelings or by physical restraint. In particular, I thought of Nazanin Zaghari-Ratcliffe, separated from her husband and daughter, through political machinations for which she has no responsibility or control. I thought of those trapped in poverty, unable to break out of a cycle of deprivation and people subject to oppression, be that someone stuck in a violent and toxic domestic situation, unable to move out of it, or a whole nation, such as the people of Ukraine, currently living under the daily threat of war ( since writing my first draft of this post, overnight, Russian troops have invaded Ukraine – we send merit to all those caught up in conflict). This is imprisonment within the physical world. My heart goes out to all in these situations. Mankind could do so much better!

Then, there is the prison that we create in our own heads; the holding onto past resentments or grasping for things we want, can’t have, or if we already have them, fear of losing or want more of. I have done all of those things and ultimately found them unsatisfying. It is liberating to throw such entrapments, metaphorically, into the air.  The things in my life that have given me the greatest sense of freedom, have mostly involved giving up something – or maybe letting go would be a more accurate description.

In letting go, there is sometimes a great shift in viewpoint, a dropping off of a heavy weight that has held me back for what seems like millennia. Mostly though, it seems I let go in increments when it becomes obvious that some change in the way I think or act, has become necessary. That hasn’t always meant that I have made a momentous decision to change, simply change has taken place and then I become aware of it. There is a light and freeing quality in being able to do this, which transcends all physical limitations.

A couple of weeks ago, when reflecting on the topic of Freedom and wondering what I should write, I woke up again, shortly after having fallen asleep and wrote these words:

Freedom is the unfurling of the hand of self,
finger by grasping finger

Feathers unfold, flutter, fly
Release into the stillness of an ocean sky

A vastness deep
Ripple upon ripple dissipates into the blue-black,
lit by an eternity of stars and moon

The warmth of coolness
The illumination of the night

Make of the words what you will but it struck me that Freedom is shaking off the self that is inhibited by our conditioning and allowing a deeper self to emerge and speak. This isn’t the type of uninhibited behaviour that leads to suffering, with no moral compass, though. There is a compassionate morality at its base. For a Buddhist, we find this through the Noble Eightfold Path, which in the beginning may seem to bind us but ultimately sets us free.

2 Replies to “Reflections on Freedom: The illumination of the night”