In this week’s post, in the Something that Happened in a Small Moment series, Karen Richards shares an experience of sitting in her garden, this past summer. This is followed by a reflection, in a similar vein, by SiafuAntony.

What a privilege it is to sit amongst the flowers and watch the workings of the garden.

All morning, I have tussled with bed linen, managed the washing, prepared vegetables and cooked.  Now, as my energy slackens – I used to be able to do this stuff all day long; not so much, now – I retreat to a quiet corner, while the sun lasts, and listen to the insects quietly hum.

I watch a bee dancing on the head of a clover. He makes the blossom shake. A small fly rests upon the page as I write until the vibration of my pen, against the paper, makes him fearful of the human who has just invaded his space and he flies away in fright. This quiet place, in the undergrowth, is their domain after all, not mine.

I hear a lorry rattle along the road and voices in adjoining gardens, where neighbours talk and children play. Somewhere, in the distance, a lawn is being mowed and, through open windows, kitchen sounds of saucepans, cutlery and plates clattering in preparation for the midday break.

And as I reflect, my mind turns to thoughts of other souls in less idyllic surroundings than mine.  Those being born and those dying; those in places where war is rife or personal liberty is curtailed. To those whose suffering seems to know no bounds, I offer the merit of this small moment and then, rising from my seat, I bid my leave and go and wash the dishes. 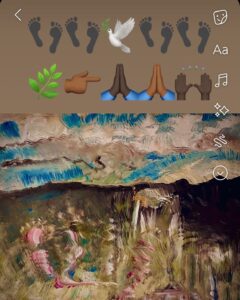 A daily ‘small moment’ that has regular healing potential for me, follows immediately after the two bell chimes on completion of morning zazen.
I am fortunate indeed to live in an area which is generally almost continuously silent and peaceful. Usually, I find myself in a state of ‘calm abiding’ following meditation; these two chimes quietly ‘roar’ into the ‘ether’.

I visualise the sound they produce simultaneously echoing right across the entire universe, all universes, travelling at inexpressible speed, moving and yet not moving. So their effect is immediately felt by all sentient beings both on our tiny planet and also each and every planet in the universe.
It brings me a ‘small moment’ of harmony, joy and connection with everything.