We all need nourishment, as does every living being and the world itself. Good nourishment sustains a healthy life. As I was creating headings for what I intended to write about, I discovered how being self-fulfilled in terms of nourishment, was linked to just about everything and everybody in my daily life. Before long I had a list as long as my arm! Indra’s net came to mind. How was I to prioritise when each area reflects a meaningful interdependent link? 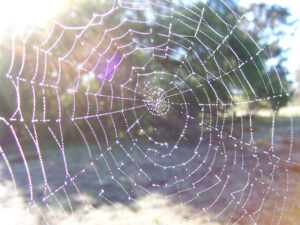 I remember as a young woman, there came a point in my life where I felt ‘undernourished’, on reflection, it was more like a calling, something was missing and I needed to find out what that was. I decided to go on a retreat, which I now understand was a ‘searching of the heart’.

On that first retreat, I was introduced to sitting meditation and the formal mealtime ceremony. The food was served in bowls which were passed down the table. It was suggested by a monk to take as much as you need, but not more than you need. You accepted the food offered with a Gassho (palms together) and then offered it to the next person with a Gassho to them, in gratitude for the food and the sharing of it with each other. 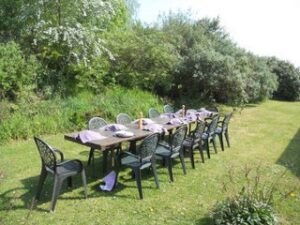 I remember feeling really strange doing this and also concerned in case I wasn’t doing it properly. On reflection there is so much teaching in that mealtime ceremony, the simple mindful repetition of the mealtime scripture’s words can slowly reveal much teaching. I believe the experience of doing so, together with the other daily scriptures sang or recited over the years while on retreat, for me, plays an important part in bringing awareness of needs and wants and how I leave enough in the ‘main bowl for others’. In other words how my own decisions and lifestyle reflect both within and without towards others.

When younger, I had previously taken much for granted, in terms of food, grabbing a sandwich at work, eating too speedily in order to get on with the next thing, without stopping to digest the experience and feel gratitude. For whatever reasons, I unintentionally (probably mostly unconsciously) reflected this attitude of mind in most other areas of my daily life. It wasn’t that I didn’t care, it was that my mind was veiled with other ‘stuff’ which affected my decisions. Getting on to the next thing was a priority in those days, I wasn’t giving space to truly see what was coming through my own senses, the eyes, ears, nose, taste and touch, my mind was continually projected to what I needed to do next. I thought this was the only way to cope with a busy job, family life and all the other identities I had at that time. I guess it is similar for many who have busy lives, always doing something, while thinking about the next thing to do. This kind of habitual process can rob us of many precious moments, rather than just being where we actually are. The sitting meditation became a part of my everyday life and I began to notice much more through being still and more in touch with my own senses.

Our relationship with food and self-nourishment can be a metaphor for all activities in life. I had been self-absorbed in being in control of the next thing and that simple action of being mindful when eating during the mealtime ceremony, was an opening for me to base my practice on experiencing my own existential reality and its interdependence with so much more.

Being human and prone to mistakes, I need reminders towards diligence and care, there seems so much distraction in today’s world to be seen from a small-minded point of view. Therefore, for me, daily meditation practice and time out to rest and renew is part of a way of offering to myself and others.

The Five Thoughts:
We must think deeply of the ways and means by which this food has come:
We must consider our merit when accepting it.
We must protect ourselves from error by excluding greed from our minds.
We will eat lest we become lean and die.
We accept this food so that we become enlightened. 2.

References:
1 Indra’s net of jewels; each jewel is reflected in all of the other jewels, an infinite reflecting process. Every jewel is intimately connected with all other jewels in the universe, and a change in one jewel means a change, however slight, in every other jewel.
Avatamsaka Sutra

9 Replies to “Reflecting on lessons of Nourishment ~ by Mo Henderson”