Continuing our theme of “Something Done in a Small Moment”, our second post is a very moving piece by Chris Yeomans. 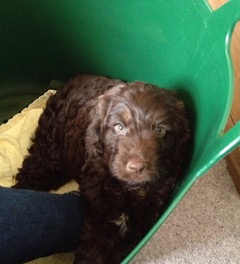 In June 2014 I drove over to Ely from my home in Norwich to collect my new puppy. Unsure how keen he would be on travelling, I decided that he could be contained in a large plastic garden tub, out of which he would not be able to climb. The puppy did not share my views. I settled him in it on the passenger seat, secured the seat belt around the tub and got into the driver’s seat. Immediately he decided to try to climb out.

He was eight weeks old and still had those piercing, puppy blue eyes, which later turned the usual adult dog brown. I put my hand into the tub to try to settle him. He looked up at me and met my gaze directly. Our eyes locked and I think in that moment of intensity, he bonded with me. He settled down on the blanket, keeping one eye on me, and has been reluctant to be very far away from me ever since.

Some twenty years earlier, I went to Throssel Hole Buddhist Abbey for the Jukai (lay ordination) ceremonies. I hadn’t really got any idea what I was letting myself in for. I was a relatively new member of the Norwich group and a rare opportunity arose of having some childcare, which allowed me to take the week away. So I booked in. The ceremonies were memorable and often spectacular. It was a great week to be at Throssel and I had, of course, decided to commit to the practice and to the Order. But on the whole, I was underwhelmed.

I did what I was told to do, walked where I was required to walk, and meditated when scheduled to do so. And then came the part of the ceremony where the new ordinee is presented with his or her bloodline certificate, the Kechimyaku. I went up to the altar where Reverend Master Daishin was seated. He handed me the beautifully folded envelope. For a brief moment, I looked up at him and he looked straight back at me. It felt as if some kind of intuitive understanding passed between us. And that feeling has never left me.

It suddenly felt like such a huge thing. Here it was, a certificate with my name on it and a red line going directly to this Master and beyond, through the whole lineage. Connecting me, someone totally unknown and pretty insignificant, me, with this mighty inheritance. And there was and is no going back. That was a commitment which is unbreakable. And there have been times during the journey when I have seriously thought about trying to break it. But I can’t. I can have barren periods where I seem to do very little except just be, I can have more active times, I can just live an ordinary daily life, but I can never not be a part of that line.

Just one small moment of direct eye contact and my world was altered in perpetuity. I had neither sought it nor expected it. It just happened. And it still takes my breath away.