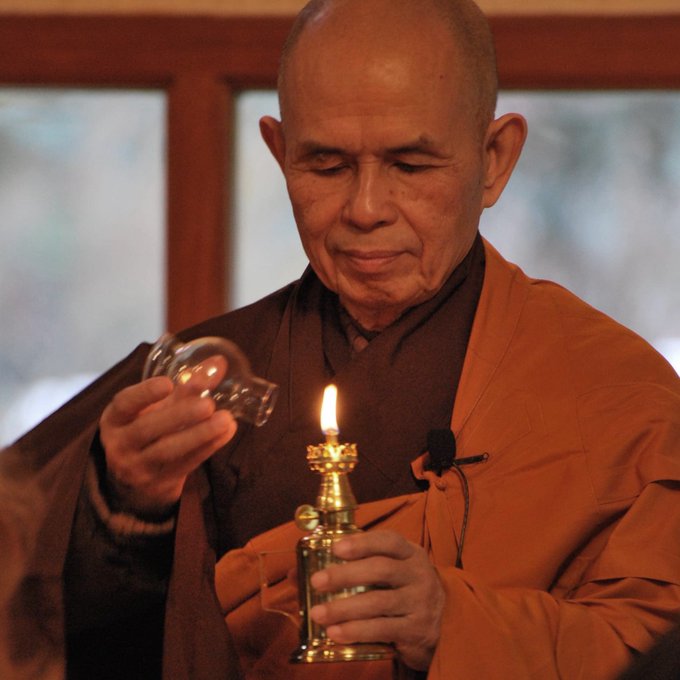 This morning, the great monk Thich Nhat Hanh passed peacefully away, in his temple, in Vietnam. His writings were some of the first that I read, when I discovered  Buddhism, in my mid-twenties. I am grateful for the engaging and accessible way that he expressed the teaching, which struck a chord, straight away.

The internet is currently flooded with tributes and reminiscences of his life, so I will not try to recreate them here. Suffice to say, I feel drawn to reread some of his books and, having lost six people from my life, during these past pandemic years, this quotation, posted by a Buddhist friend to Facebook, this morning, lifted me out of a fog of melancholy and raised my eyes to the sky. Thank you!

“One day as I was about to step on a dry leaf, I saw the leaf in the ultimate dimension. I saw that it was not really dead, but that it was merging with the moist soil in order to appear on the tree, the following spring, in another form. I smiled to the leaf and said, ‘You are pretending’. Everything is pretending to be born and pretending to die, including the leaf.

The Buddha said, “When conditions are sufficient, the body reveals itself, and we say the body exists. When conditions are not sufficient, the body cannot be perceived by us, and we say the body does not exist.” The day of our death is the day of our continuation in many other forms. If you know how to touch your ancestors in the ultimate dimension, they will always be there in you, smiling. This is a deep practice.

Everything and everyone is dwelling in Nirvana, in the Kingdom of God,”

6 Replies to “Thich Nhat Hanh – in gratitude for a life well spent.”

Dew on the Grass
Manage Cookie Consent
To provide the best experiences, we use technologies like cookies to store and/or access device information. Consenting to these technologies will allow us to process data such as browsing behavior or unique IDs on this site. Not consenting or withdrawing consent, may adversely affect certain features and functions.
Manage options Manage services Manage vendors Read more about these purposes
View preferences
{title} {title} {title}
%d bloggers like this: