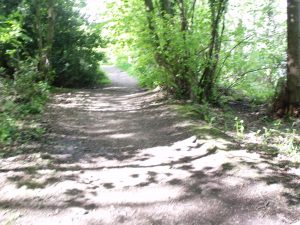 The late, Reverend Master Alexander Hardcastle, when he was prior of Telford Buddhist priory, often said,’ Nostalgia is not what it used to be’, and then would chuckle at the irony of his remark. He may have said this in the company of others, but my recollection is that we were usually alone, working on some project or other. I would laugh with him (though maybe not as heartily) and I knew what he meant. Nostalgia, which is essentially a sentimental view of the past and reflects discontent with the present, holds less sway over us once we become regular meditators. We become far more satisfied with our present reality, however difficult and painful that might feel, at times.

Remembrances of the past come and go. They are part of our brain’s natural function and can be helpful both spiritually and practically, in the everyday world. What happened in the past is part of who we are now; part of our current experience. The physical and spiritual realignment of the heaps of our being, in time and space, create a new reality, moment by moment. Within this shift, our memories float along with us.

Those that feel painful, we may shrug aside (although the cells of our body will still remember them unless we have done significant work on ourselves). Or we may do the exact opposite, and hold them tightly, in fear of what would happen if we let them go. Conversely, we may hold onto memories of good times, idealise them, hold them up as the epitome of existence. Of course, there are many permutations of how this might manifest itself.

As a nation, we are prone to do the latter. Hence the success of political promises to make our country ‘Great Again’ as if, in some perfect past, all ills were virtues and we stood, as a united and homogenous body, a paragon of unity and virtue, which was lost to a perceived evil, along the way, and to which, with the ‘right’ political direction, we can return. This is a deluded notion, of course. The world, its nations, and individual people exist in a constant state of flux within which, what we judge as good and evil continually arise, like ripples on a much deeper ocean.

In my younger years, when I was focused on work, family and the setting up of a priory – the time of life referred to by the social-psychologist, Erikson, as a time of ‘Generativity’, when we are at our most productive – I had no inclination to look back. More recently, having lost several of the older members of my family, during the pandemic, I have enjoyed reminiscences of those treasured people that I called, mother, aunt, uncle, cousin, teacher and friend. Some memories might even be termed ‘nostalgic’, having a sentimental or ‘rosy’ quality to them, mostly they have been part of a rite of passage, a celebratory ceremony of the mind, and have included, of course, thoughts of you, dear Rev. Alexander. I am grateful for them all.

3 Replies to “Nostalgia’s not what it used to be”