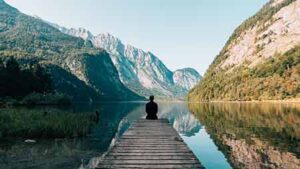 Over the next few days, the Dew on the Grass team will be sharing articles, poems and artwork, on the theme of Freedom.  Each of us has presented our experience of Freedom from a slightly different perspective but all of the pieces reflect the seeking mind of the Buddhist practitioner. We hope that you enjoy reading them, and should you have reflections of your own on this topic, please do get in touch, via the contact page, or in a message via the Dew on the Grass Facebook page, by Monday the 28th of February, and we will be happy to share them. Please read our editorial guidelines, by clicking the ‘About’ button.

A couple of decades ago, it seemed that all the usual stresses and anxieties of life had coalesced for me into one focus. I became aware that I was suffering from severe claustrophobia. The feeling of being trapped is of course the antithesis of freedom. I found I was unable to go into places where my way out was not clear: caves, basements, the London underground in crowds, trains and planes, the backseat of two-door cars. I began to sleep with a knife when in my tent so that I could cut my way out through the fabric.

Retreats at Throssel became a challenge. When I mentioned to a monk that I wasn’t sure I could sleep in the Ceremony Hall he said, with some incredulity, ‘But we don’t have a larger space, Chris.’ I explained that it wasn’t the space around me as much as my ability to get out. And to get out of that room I would have to negotiate sleeping bodies, noisy doors, clattering stairways, deal with the fear of meeting the Night Guardian in the corridor, of not being supposed to be walking around. Thus it was that I found myself allowed to sleep in the Avalokiteshvara shrine, close to my exit route, next to plastic containers of human ashes, which was almost, but not quite, worse.

But it didn’t stop there. At home, panicked by being in bed, I would go out into the garden and stand and look at the stars. And suddenly I felt trapped on the planet. Unlike the fish which doesn’t know it is in the ocean, I knew that there was nowhere else that I could survive and that gravity tethered me to the earth. It sounds obvious, but for me, it was an experiential realisation that I am one with all things and not a separate being. I am not free to leave this planet, which provides me with the very means of my existence – the air I breathe, the food I eat. I remember RM Saido once saying ‘If you have difficulty grasping the concept of dependent origination, try not breathing for a while.’ I breathe because of the infinitely complex life of this planet. I am an earthling.

‘Man is born free and everywhere he is in chains.’ Thus Jean Jacques Rousseau in 1755. And today, in 2022, I think perhaps we understand that we are not born free at all and really have no chance of ever attaining freedom if that is something that we seek. At birth, we bring with us our entire genetic make-up. Immediately, life starts to happen for us and we are affected by an infinity of sensations. We grow, we learn we relate and we become one of the indescribably complex beings that comprise the human race. Within that framework of my life and being, I have the illusion that I am free. But in reality, I have very little control over my life. Simply to start with, I cannot really affect my physical environment. In the words of the Tom Lehrer song – ‘Don’t drink the water and don’t breathe the air.’ Except that of course I have no choice.

But beyond that, I am aware that every single thing I do and think is because I am me. I am pretty much unable to think ‘outside of myself’ because my thought patterns and my opinions are the product of my genetic nature and my experience. Even my wish to do ‘that which is good to do’ or to ‘do the next thing’ arises because of a fortunate concatenation of circumstance and predisposition that has led me to this Buddhist path. My human mind allows me to consider alternative paths and alternative courses of action, but I am deluded if I think I really have the freedom to choose to do anything that is ‘out of character.’